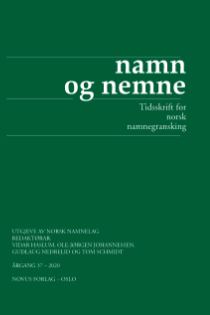 The paper examines the existing literature on the gender of some place-names in Norwegian. A couple of inadequacies in standard treatments are pointed out. The paper shows that there is much variation in what gender writers actually do assign to these names, thereby supporting a previous claim by Aljoksjina 1995 that intuitions vary. It is argued, against earlier treatments, that names of islands can hardly be claimed to belong to common gender, and that the neuter is not really ungrammatical with names of cities and towns. The most innovative part of the paper is the attempt to explain why such phrases as Det gamle Oslo invariably must be neuter. It is suggested that this is an instance of semantic agreement due to ‘virtual reference’, and as such comparable to the use of neuter found in so-called pancake sentences (Haugen & Enger 2019).