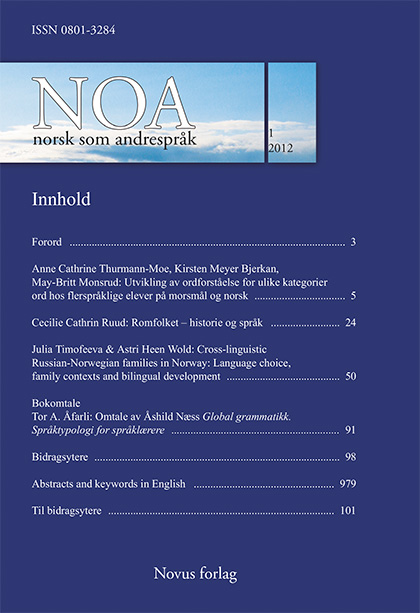 In this study we investigated how the process of initial language choice and minority language transmission to the child was carried out within Russian mother/Norwegian father families living in Norway. The study was based on grounded theory, and semi-structured interviews were used to collect data. 15 mothers were interviewed about their initial choices concerning language transmission, their actual language use within the family and their childÃ¢â¬â¢s language development. All the mothers except one were initially motivated to transmit Russian to their child, and the main reasons given for this choice are presented. The actual use of Russian within the families varied, however, depending in particular on the fatherÃ¢â¬â¢s competence in Russian and the quality of the emotional relationship between the mother and the father. Furthermore, these variations seemed to have consequences for whether the child developed active or only passive bilingualism. The results are interpreted within the present socio-historical context of Norway where a high number of women are engaged in full-time work, fathers often participate actively in child care and even young children go to kindergartens.
PDF ()