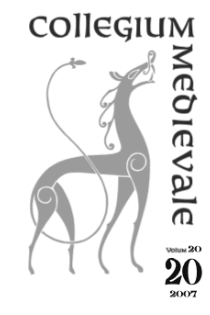 This volume contains the revised papers from a seminar to celebrate the completion of a long project of cataloguing the fragments of medieval manuscripts in the Swedish National Archives in Stockholm.1 These fragments, mostly of parchment manuscripts,2 are preserved as wrappers around post reformation account books. This was the usual way of reusing the parchment codices of the medieval church after the Reformation.3 The cataloguing project, called the MPO4 project, was commenced in 1995 and ended nine years later at the time of the seminar. The seminar assembled a group of foreign and Swedish scholars with whom the project had had contact during the project period. These scholars represent different fields for which the fragment material represents an important source.
PDF ()

Espen Karlsen
Espen Karlsen (born 1966) has a position in Book History at the National Library of Norway, Oslo. Doctoral thesis in Latin Uppsala 1998 (published Bern 2001). He has published on different topics within Latin studies, inter alia on language, on book history and on manuscripts. He has been working on the collection of Latin parchment fragments in The National Archives of Norway in Oslo 2002-2006.