Shoes and shoemakers in late medieval Bergen and Stockholm 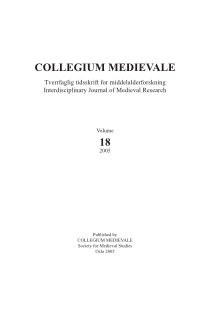 The purpose of this article is to analyse the differences between shoemakers in late medieval Bergen and Stockholm on one hand, and the differences between the archaeological finds of shoes in the two towns on the other hand. The relations between those differences and the possible reasons for disparities will be discussed.
To judge from the written sources, the ethnic background, the political situation and the inner organization of the shoemakers were quite different in Bergen and in Stockholm. In Bergen there was a strong influence of the Hanseatic League, Liibeck in particular, on the shoemakers, and this might have had implications for the shoe production. In Stockholm, there was more room for varied influences. The questions to be discussed in the following are thus firstly if there are discrepancies between the Stockholm and Bergen shoemakers and if so the background for such discrepancies. Secondly, if differences between the shoes found in the two towns might be explained as a result of differences between the way the shoemakers were organized in the two towns. This will be seen in a European context, as well as in the context of the influence ofLiibeck on the shoemakers in Bergen.
PDF ()
Forfattere beholder opphavsretten og gir tidsskriftet rett til første publisering av arbeidet. En Creative Commons-lisens (CC BY-SA 4.0) gir samtidig andre rett til å dele arbeidet med henvisning til arbeidets forfatter og at det først ble publisert i dette tidsskriftet.