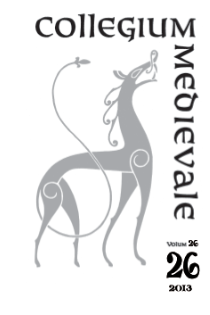 Baptismal fonts on the South Coast of Norway with inspiration from Stavanger Cathedral
The choir and Bishop's chapel of the Cathedral of Stavanger were reconstructed in the Gothic style, after the fire in 1272. This was a novel form of expression directly introduced from abroad, and probably crafted by stone masons and carvers from the south-western parts of England. The fact that these new ideas were reflected in baptismal fonts in the diocese of Stavanger, has misled some scholars to assume that a production centre for fonts was connected to the Cathedral; and, furthermore, that the fonts carved in this workshop were dispersed in the diocese. In the article I question these assumptions, focusing mainly on the production material: the soapstone. Five fonts make out the seemingly consistent group: Fjære, Øyestad, Holt, Tromøy and Stavanger. The first four have survived in churches in the county of Aust-Agder on the South Coast, and the last one in Stavanger Cathedral in Rogaland county. Most of the 224 medieval baptismal fonts which I have recorded up till now, make up natural groups, based on similarities between the three main features: species of rock, typology and decoration. The type of rock is fundamental for the discussion of workshop and production. My examinations make evident that the font in Stavanger is carved of a greenish, grey, soft and fat type of soapstone, a type normally found in Rogaland. The four exemplars in Aust-Agder are, on the other hand, made of a grey, micaceous, smooth and medium hard type, characteristic of soapstone in the quarries of Aust-Agder. This means that all five fonts of the group are carved in local stone. Consequently the fonts on the South Coast are not produced in the Cathedral workshop of Stavanger. Fjære, Øyestad, Holt and Tromøy constitute a subgroup, while the font of the Cathedral remains unique.Analysis of the typology of the group shows that Tromøy and Stavanger are basically circular, while the other fonts of the group are octagonal. The decoration is dominated by a frieze running around the bowls; eight gable motifs constitute the frieze. As the gable is a Gothic ornamental element, the group has been named "gable fonts" ("gavlfonter") by the author. The gable motif, as well as various ornamental leaves carved on these fonts, is obviously inspired by the ornamental repertory of the choir in Stavanger Cathedral. It has earlier been assumed that the gable fonts were introduced by the font in Stavanger. My view on the relative date of the fonts in the group diverges from this, but I stick to the earlier date of the group as in general. My discussion of the time at which the gable fonts were made is based on the workshop attached to the Cathedral after 1272. The ornaments which the craftsmen employed when rebuilding several of the churches in Aust-Agder, reflect the masonry in Stavanger. The Øyestad font may have been made as the first one of the group, provided that the time of the construction of the church around 1280 is correct. The font in Fjære Church was probably carved at the time when the church was rebuilt by a team, a few years before 1300. The font in Holt Church seems to be a simplified, but precise and professional version of Fjære; it was probably made a few years after Fjære by a trained stone mason, possibly around 1300.Based on the type of leaves used on the Stavanger font, I find it most likely that it was made by one of the later stone carvers attached to the Cathedral workshop. Moreover, I also think that the very simple and circular Tromøy was made by another carver at approximately the same time as the one in Stavanger, i.e. a few years after 1300. This would mean that the whole group was produced during a relatively short period, between c. 1275 and 1325.In short, the fonts on the South Coast were not dispersed across the diocese from Stavanger - the stone masons and carvers travelled the distances and took on odd local assignments.
PDF ()
Forfattere beholder opphavsretten og gir tidsskriftet rett til første publisering av arbeidet. En Creative Commons-lisens (CC BY-SA 4.0) gir samtidig andre rett til å dele arbeidet med henvisning til arbeidets forfatter og at det først ble publisert i dette tidsskriftet.